King Leopold II of Belgium is remembered today for the violent brutality of his personal rule over the Congo. However, his leadership of his family was also tinged with cruelty and coldness.

His three daughters grew up in an authoritarian environment defined by the unhappiness of their parents' marriage, the loss of their brother, the strictness of their father, and the rigid education of their mother. When the future Leopold II married the Austrian Archduchess Marie Henriette, he had selected her for her imperial and Roman Catholic pedigree. Still a bit of an upstart dynasty in just its second generation, the Belgians needed to bolster their continental ties to continually legitimize their place in royal Europe. Unfortunately, these political necessities left little room for finding a compatible mate for Leopold or for his children. Like so many princesses, Marie Henriette was happiest when she was riding--it was perhaps her only opportunity to experience something akin to freedom. At home, the couple was incompatible. Married as teenagers, they could have grown together but instead they grew apart.

In the first ten years of their marriage, they managed to have three children: Louise, Leopold, and Stephanie. Their son, and heir, was clearly the favorite, but all of the children were subjected to a difficult regime of hard beds, cold baths, and very limited (very formal) time with their parents. The family seemed complete, allowing the king and queen to grow further apart.

Then, tragedy struck. In January 1869, their nine-year-old son and heir contracted pneumonia and died. Not only was this a great personal tragedy, but it had national urgency. Until very recently, the Belgian succession was governed by Salic law: women could not inherit the throne. (In fact, when King Philippe ascends the throne on July 21, 2013, his daughter Elisabeth will become the first-ever female heir in Belgian history.) With little Leopold's death, the regal couple again tried to extend their family, resulting in the birth of yet another daughter, Princess Clementine in 1872.

By this time, their oldest child, Princess Louise was already 14 and at an age when 19th-century princesses seriously started thinking about mates. Even on this matter, Leopold and Marie Henriette could not agree. The Queen was insistent that Louise should marry her much older second cousin, Prince Philipp of Saxe-Coburg-Gotha, whose family had settled in Hungary, which the Queen considered her native land. Attracted to a romantic life in the illustrious court of the Austro-Hungarian Emperor Joseph II and his beautiful wife Empress Elisabeth, Louise pushed her father for the match. Leopold felt the prince was not illustrious enough and that he had too many ties to the hated Prussia, but he nonetheless conceded.

Louise was traumatized from the start. According to her own account, no one had explained to her the physical side of marriage. She was 15 and her eager husband was nearly 30. He was much more experienced--Louise even later alleged that he had been her mother's lover! The terrified girl ran away from the bed chamber and was later found sobbing in a greenhouse and taken to her mother. In one version of the story, the Queen tried to comfort her and explain her duties, but Louise's version characterizes her mother as shreiking at her. As for the bridegroom, Louise said he tried to ease their future lovemaking by plying her with alcohol and showing her dirty pictures.

Louise did not warm up to Philipp much, but she absolutely delighted in her life in Vienna. She became one of the most glamorous and scandal-ridden women of the court. She learned to love amorous activities and was rarely, if ever, discreet when she embarked on an affair. Her husband was no less faithful. Following the birth of one son and one daughter, they grew more and more separate. Between her busy social schedule and extramarital activities was not a very attentive mother. She was also a sharp-tongued gossip, who enjoyed slandering others.

After just a few years in Vienna, however, she had garnered enough status that she was able to bring her little sister Stephanie to the attention of the imperial family, which was in need of a bride for its devastatingly handsome heir, the romantic and moody dreamer, Crown Prince Rudolph. Stephanie was no less eager than Louise to escape her homelife in Belgium for the cosmopolitan life in Vienna. 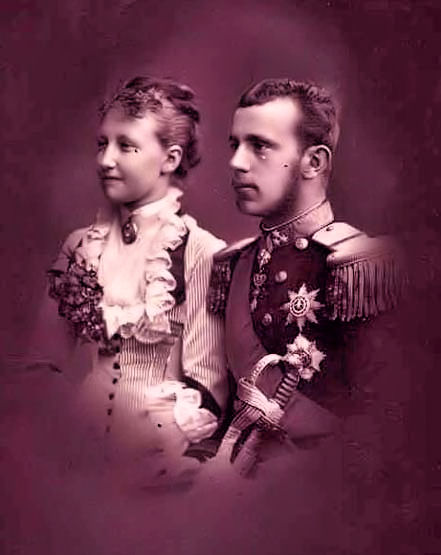 The couple married in 1881, and Rudolph, who had already rejected nearly every other Catholic princess in Europe, initially found Stephanie pretty and clever, but she was never able to match her husband's restlessness. Plus, her religious and political conservatism was offended by his liberal, some might even say radical, views. Always dapper and popular with the ladies, Rudolph was never faithful. When their daughter, Princess Elisabeth, who was always known by the Hungarian dimunitive Erzi, was born, most believed that the couple had plenty of time for more children. However, Rudolph, who was flighty like his mother, felt increasingly trapped by Stephanie and life at his father's court. When Stephanie contracted a venereal disease from him, the only reason for his marriage--to procreate--was snatched away.

Given no authority or responsibility by his aging father, Rudolph engaged in dangerous political intrigues and petty romances. Stephanie's patience wore thin. Even her "prettiness" wore off, as she was labeled an "ugly elephant" by her famously beautiful and wispy thin mother-in-law the Empress, whom Rudolph worshipped although from afar as she rarely visited Vienna, preferring to travel impulsively, buying and renovating castles wherever she went. Rudolph grew desperate.

By the time, the now 30-year-old prince started an affair with a teenaged Baroness Mary Vetsera, he was a man without purpose or direction. When he slipped away to his hunting lodge at Mayerling, he may have already decided his course of action. The next morning, Rudolph and Mary were both found shot to death. The events of that fateful night are still disputed. (Read my post, Tragic Death: Rudolph's Final Moment.) The generally accepted theory is that it was a double suicide. Others contend that Mary had no idea what was happening, and still others believe the suicide story was concocted to cover up a political murder. Nevertheless, Stephanie would now never be Empress of Austria. Since her daughter could not inherit the throne, she was also not the mother of the heir. She also was a person without purpose.

In the meantime, back in Belgium, little sister Clementine, now a teenager, had fallen in love with a most appropriate choice: her cousin, Prince Baudouin, who was also her father's eventual heir. Raised almost single-handedly by their mother, Clementine had grown up to be a dutiful young woman. She was deeply in love with Baudouin, but he was less keen on the match. As they moved toward an engagement, Baudouin continued his romantic liaisons with the ladies. Suffering from the flu, he willingly accepted a challenge from his mistress' husband was wounded on the so-called field of honor. Within days, he was dead, and Clementine was left to nurture her broken heart.

Her sister Louise was busily making her own romantic scandals, too. By 1898, the 40-year-old princess had become what we would now term "a cougar." Determined to marry her toy boy, Count Geza Mattachich, she ran away with him, taking her teenaged daughter with her and started divorce proceedings. The clandestine couple made their way around central Europe and the Mediterranean, leaving bad debts and innuendo in their wake. Louise even opened shop accounts in Crown Princess Stephanie's name and defaulted on them. She wanted to be free of her husband but not of her lavish lifestyle. Horrified by Louise's scandalous ways and fearing for her own reputation, her daughter returned home. King Leopold and Queen Marie Henriette both sided with their son-in-law. Prince Philipp even challenged Geza to a duel. Like Baudouin, he was injured but he did not die. Meanwhile, Louise and her lover built up millions of dollars in debt. At one point, he was imprisoned for four years while she was given the choice between returning to Philipp or going to an insane asylum. She chose the asylum. Nevertheless, the divorce dragged on for eight years, until it was finally granted in 1906. Loyal throughout, losing his own title and reputation along the way, Geza and Louise eventually settled in Paris, where so many tragic couples seem to migrate.

Widowed and increasingly estranged from her daughter, Stephanie also found a count to bring her solace. In 1900, against her father's wishes, she married Count Elemer Lonyay de Nagy, a steadfast and dashing Hungarian.

While Leopold was being disappointed by his first two daughters, his youngest was rising in his favor. After her heartbreak over Baudouin, Clementine was allowed to begin travelling. Unlike her sisters, she took no lovers and started no scandals. Instead, she fell in love with Prince Victor Napoleon, heir of House of Bonaparte. Leopold opposed a marriage between them, wishing to avoid poor relations with the Republic of France. Clementine argued with him, but lost. Instead of rebelling, she returned home and assumed the duties of her father's first lady, when Queen Marie Henriette died in 1901.

And, that's when things got really nasty with her sisters. Denied any share of their mother's inheritance, Stephanie and Louise sued the King. Despite the public scandal and his vast wealth, Leopold refused to budge. Louise and Stephanie launched a similar suit in 1909 when he died, leaving his money to his illegal second wife and a new royal foundation. 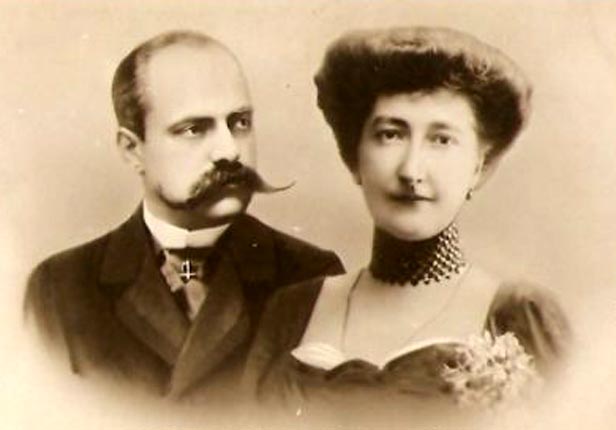 For Clementine, however, Leopold's death brought a much more important inheritance. Her beloved Prince Victor Napoleon had also never married. She asked the new King, her cousin Albert, for permission, and was finally able to marry him when she was 38-years-old. The couple had two children and lived a blissful life together in Brussels, until World War I when they escaped to England and Clementine joined the Red Cross. After the war, they returned to the continent. He died in 1926, and Clementine survived him by nearly 30 years. She continued her charitable work, ultimately earning the Legion of Honor.

Her sisters, however, were not earning any honor. Stephanie had also joined the Red Cross during the First World War, but she squandered her wealth through gambling and bad business decisions. She wrote her memoirs, "I Should Have Been Empress," but was banned from publishing them. Her second marriage was much happier than her first, but she never really connected with her only child. During World War II Stephanie and Elemer escaped Soviet troops and took refuge in a local abbey. She died there shortly after the war ended in 1945.

Already romantic refugees, Louise and Geza bounced around Europe during WWI. But, they returned to Paris at its conclusion. Louise was devastated by his death in 1923 and followed him to the grave the following year. Ever defiant, she also wrote her memoirs, attempting to justify her unconventional decisions. Her own children never forgave her, and she is remembered today as one of the most tragic modern princesses.
By Cheryl Ciucevich