Five Years with the Cambridges

It is hard to believe that five years have already passed since the marriage of Prince William to his long-time live-in love Catherine (Kate) Middleton. It has been an eventful half decade for their family. Let's take a look back at the key moments: 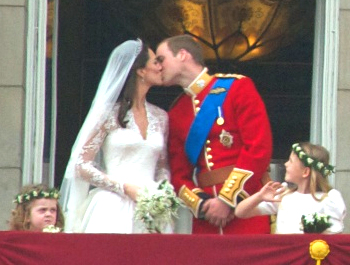 1. April 29, 2011: A Bride and a Title
Not only did Prince William get a wife on this day, but he also gained a title. In previous generations, princes were granted their own territorial titles much early, but for the last several decades, they have been granted upon their marriages. There was much speculation about which title he would receive (see my post on the subject a year before the wedding). In the end, he was given a title with strong sentimental meaning for his grandmother, The Queen. Her beloved grandmother, Queen Mary, had descended from the last royal dukes of Cambridge. However, the fact that the former Miss Middleton is now styled as Her Royal Highness The Duchess of Cambridge led to some confusion about what her actual rank is. To clarify (again) as the wife of a British Prince, she holds the rank of Princess, even though she is called Duchess of Cambridge. It is not, however, ever appropriate to call her Princess Kate or, even worse, Duchess Kate, as she holds that rank by right of her husband. This would make her Princess William if they had no other titles to use, just like Princess Michael of Kent. The Palace did not help things when it announced that people could call her whatever they wanted to...

2. December 3, 2012: A Baby is on the Way
I was at a conference in Washington, D.C. when my Twitter feed and email box started blowing up with messages of congratulations. I had to step outside to investigate what was happening. As it turns out, I was not having a baby, but the Cambridges were! Unfortunately, the pregnancy was announced much earlier than usual because Kate was suffering from hyperemesis gravidarum, a serious and potentially dangerous form of morning sickness for which she had to be hospitalized. The early announcement led to an even more prolonged state of anticipation on the part of royal watchers everywhere. By the time, the big day finally arrived, royal baby mania was even greater than it had been for William's birth, and I think we were all completely exhausted.

3. July 22, 2013: It's a Boy!!
The arrival of a prince temporarily relieved anxieties over the fact that the British succession was still based on the outdated and sexist practice of male primogeniture, by which older daughters with younger brothers are displaced in the line of succession by their brothers and their brothers' descendants. (This is why Princess Anne The Princess Royal was second in line to the throne at the time of her mother's accession, but is now #12 after her brothers and their children and grandchildren.) Kate gave birth in the same hospital as Diana had and under the care of The Queen's own gynecologist. #Awkward  One day later, we got the first glimpse of the boy we would come to nickname "Cheeks" and the day after that we learned that his name would be George Alexander Louis. And, prince or not, there really is not a cuter kid on the planet. He just gets more and more impossibly cuter. The latest pics of him greeting President Obama in his pajamas and robe are almost cuter than I can tolerate!

4. May 2, 2015: (Finally) It's a Girl
At long last, the heir to Diana that the world had awaited was finally here. This is an incredible legacy for a little girl to carry, but her parents did not make it worse by naming her Princess Diana, although her late grandmother was remembered among her names: Charlotte Elizabeth Diana. (Interestingly or oddly, William's youngest first cousin is Lady Charlotte Diana Spencer.) While many believe the name Elizabeth is for The Queen (and it may be), I think it is important to remember that Elizabeth is also the middle name of both Kate and her mother Carole, as well as a fairly common name among her ancestors. Both Charlotte and Kate are unfairly compared to the late Princess of Wales, so I am thankful that so far, Charlotte is looking less and less like her much-mourned grandmother.

The Family Home
During their early marriage, William and Kate continued to reside in their pre-marital home on Anglesey to be near William's military posting at RAF Valley. Since leaving the military, the Cambridge family has at last settled into a country home, Anmer Hall, on The Queen's Sandringham Estate in Norfolk (where Diana was born) and the apartment they renovated in Kensington Palace. They did not choose the apartment where William and his brother Harry lived with their mother. Instead, they selected the one that had belonged to The Queen's late sister, Princess Margaret.

Royal Duties
Some have whispered that the Cambridges have not taken on enough royal duties, but I think it is important that they are not the immediate heirs to the throne. Also, The Queen herself very much enjoyed a more private early marriage and likely approves of the way Kate is being eased into royal duties, especially in light of the disastrous royal introductions of The Princess of Wales and The Duchess of York in the 1980s. They have represented Her Majesty on several foreign tours including travels to Australia, New Zealand, Canada, the United States and, most recently, India and Bhutan, as well as paying visits to Continental Europe. On the home front, Kate has taken on several patronages, focusing on children, sport, the arts, and mental health advocacy. Meanwhile, William has continued his support of the armed forces, young people, and conservation. Together, with his brother, Prince Harry of Wales, the couple has a foundation that is dedicated to young people, sustainable development, and supporting the armed forces.