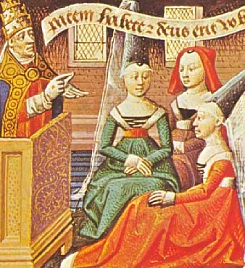 She abandoned her husband and baby son to make herself Queen of France. She forced her second husband to put away his first wife. She willingly was excommunicated in order to cement her power. She even asked the King of England to kill her stepson.

The alleged misdeeds of Bertrade de Montfort, who died 900 years ago, are legion. Renowned for her beauty, she is remembered more for her sins. However, she lived in an age when women who dared to public life were relegated to one of only two possible roles:  a woman who was not a saintly madonna figure could only be an iniquitous mother of lies and evil. And, a beautiful woman like Bertrade was much more likely to be thought sinful than saintly.

In truth, even a woman of high station had little control over her own life. Bertrade was a daughter of the Simon I de Montfort. Her mother came from the d'Evreaux family. They were highly engaged in the politics of the lands that would eventually become France, but at that time were highly combustible small states and territories with constantly shifting allegiances.

Soon after her father's death, Bertrade was claimed in marriage by the powerful Fulk Count of Anjou, an ancestor of the future Angevin kings of England. More than twice her age, infirm and lecherous, Fulk had already gone through four previous wives, discarding them for political or religious reasons as necessary. (Consanguinity, or being too closely related under church law, often made a convenient reason for annulment, even though such relationships were known at the time of the marriage.) Bertrade soon conceived and gave him a son, also named Fulk, but she did not stay long at his side.

Whether through her own seductive wiles or without her true consent, Bertrade was spirited away by King Philippe I of France. Like Fulk, he had to discard another wife to make room for Bertrade and he didn't seem to care that his new lady had another husband. He married her against church teaching and was summarily excommunicated. Fulk never received compensation for his loss, but he still allied with Philippe when it was expedient for him.

As for Bertrade, she was a frequent companion to her second husband. Romantics might interpret this one way while her critics see it as a sign of her thirst for power. In their 15 years together before his death, they had three sons and daughter, but alas none of Bertrade's children were destined for the French throne. Philippe's first wife has already given him the heir and it was this young man, the future Louis VI, whom Bertrade is accused of trying to have poisoned.

Alas, her life ended rather benignly. Like many noble and regal widows of that era, she retired to a nunnery and died there in 1117 while still in her 40s.