Prince Philip and Women He Loved 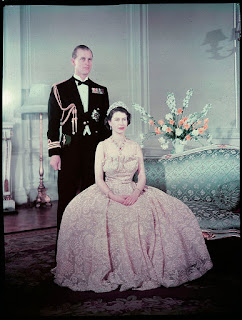 Just two months short of his 100th birthday, The Prince Philip, Duke of Edinburgh passed away on April 9, 2021 at his home at Windsor Castle. Born a Prince of Greece and Denmark, he was born Prince Philip of Greece and Denmark, the youngest child but only son of Prince Andrew of Greece and Denmark and Princess Alice of Battenberg. He was the longest-lived descendant of Queen Victoria of the United Kingdom (his great-great-grandmother) and of King Christian IX of Denmark (his great-grandfather) and of Tsar Nicholas I of Russia (his great-great grandfather). He was the third longest-lived member of the British Royal Family, after his wife's aunt Princess Alice Duchess of Gloucester and his mother-in-law Queen Elizabeth The Queen Mother.

Before he was two, in the tumult that was the Greek monarchy, his father was charged with treason and sentenced to death. His uncle, King Constantine II, was exiled (again). The British helped get Andrew's sentence commuted and sent a warship to rescue him and his family. As the story goes, an orange crate was used as an improvised cradle. After that, his parents eventually went their separate ways with his father living an essentially bachelor lifestyle and his mother undergoing psychotherapy, and for a time, being committed to an asylum. Young Philip became something like a royal foster kid, bouncing around among his much older sisters, his many royal aunts and uncles, and his maternal grandmother, Victoria Marchioness of Milford Haven, who was the older sister of the Empress Alexandra and Grand Duchess Serge of Russia, both of whom had been murdered by the Bolsheviks just a few years before Philip was born.

Philip started school in Paris then went to Germany before being enrolled at Gordonstoun in Scotland at age 12. When he was 17, he went to the British naval academy at Dartmouth, and then joined the British Royal Navy just after the start of World War II. He served with distinction, but spent much of his leave time back in England, where his long acquaintance with a distant cousin was turning into something else.

The future Queen Elizabeth II spent her adolescence at Windsor Castle, referred to as an undisclosed location in the countryside, during the war. Philip was an occasional guest. They became penpals while both she and some members of his family hoped this would prove a royal match. After the war, Philip remained in the Royal Navy while a romance blossomed. The couple were engaged in 1947 after he surrendered his Greek titles and citizenship. With no realm surname of his own, he adopted the one used by his mother's British family: Mountbatten. For a brief time before his future father-in-law King George VI created him Duke of Edinburgh and a British Royal Highness, he was known simply as Lt. Philip Mountbatten, R.N. (Read my post about their romance The Moonstruck Princess and Her Greek God.)

Elizabeth and Philip were married at Westminster Abbey on November 20, 1947. They spent much of their early marriage in Malta where he was posted with the Navy. By the time she unexpectedly became Queen on the early death of her father, their first two children, Charles and Anne, had been born. Her accession brought his naval career to an end, and Philip struggled for a bit trying to figure out what exactly the job of the Queen's husband was supposed to be. Within a decade, he had settled into and/or created his role leading to a more stable period in his marriage, which resulted in the births of two more children, Andrew and Edward.

He remained a loyal supporter to his wife, while adding his own stamp on things -- creating the Duke of Edinburgh awards, modernizing the royal homes and the royal operations. Along the way, he received much criticism for his sometimes brash manner or insensitive remarks, but he also received much praise for his dedication to service, to the nation, and to his wife. In November 2020, they celebrated 73 years of marriage. He is survived by his wife, four children, eight grandchildren and 10 great-grandchildren.

I had been planning a series of posts in honor of his 100th birthday focused on the Women He Loved. I am now launching the series two months too soon. Please come back to read about the women who shared Prince Philip's life, including: