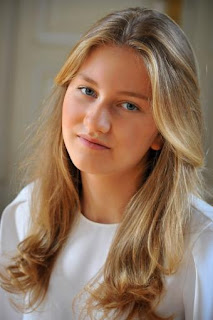 In this series, we capture the biographical and major news posts from this date in previous years so that you can "catch up" on your favorites or reflect on some topics you might have missed. One paragraph is included here; click the title to see the full post.


2009: The Teenaged Princess & The Soldier
"Princess Mary was only 17 when the war started. Naturally shy, her isolation became complete with the declaration of war. Raised entirely at home, never having attended a school of any sort, Mary’s only friends were her brothers and her maid. But, her older brothers (the future Kings Edward VIII and George VI) were away in the military and her younger brothers were away at school. She worried desperately about all of them, particularly Bertie (later George VI)—on the first night of the war, she had a nightmare that he was killed in a naval battle. With both of her parents overwhelmingly busy, Mary had only her maid, Else Korsukawitz, to confide her fears. Then, Else was sent away. As a German national, she was given the choice of returning to Germany or entering an internment camp—she chose Germany. A heartbroken Mary was alone and had nothing to occupy her." READ MORE

2015: Royal Baby Boom
"Last week, the Swedish Court announced the pregnancy of Princess Sofia. The birth of her child in April will mark the fourth royal baby for the Swedish royal family in just over two years: Princess Madeleine's daughter Leonore was born in February 2014 and her son Nicolas in June 2015; meanwhile, Crown Princess Victoria is expecting her second child in March 2016. Of course, this is not the first royal baby boom in history. Back when royal families were larger and more plentiful, they were fairly common." READ MORE  [10/25/17 Princess Sofia recently delivered her second child, while her sister-in-law Princess Madeleine is expecting her third.]

2016: To Be a Princess or Not
"In the last two decades, there has been ongoing debate about who should be officially royal and who should carry out official royal duties on behalf the monarch. In all of this time, nothing has been resolved. According to recent reports, the central tension in the discussion is between a desire for a smaller monarchy (favored by the future king, The Prince of Wales) and the rights due to the York princesses (championed by their father, the future king's younger brother, The Duke of York). So, who is right? Other royal houses have handled this very modern question in different ways. " READ MORE
By Cheryl Ciucevich No comments:

If not for the extraordinary record of King Henry VIII, his ancestor King John might well be remembered as the most notorious husband among English monarchs. Unlike Henry, whose marital misdeeds were driven largely by dynastic concerns and partly by his libido, John was driven almost entirely by greed. This should come as no surprise as he's best known as the king who was forced to sign the Magna Carta and as the devious Prince John of the Robin Hood tales.

John's first wife died 800 years ago today, on 14 October 1217. But she was no longer his wife by then. She is so little regarded in the history of the time, that even her name is not entirely certain. Various records name her by a wide range of sobriquets from Hadwise to Joan to Eleanor to Isabella. What is certain is that she (whom we shall call Isabella) was herself of English royal descent and the heiress of great amount of territory. As the youngest son of the Angevin King Henry II and his heiress wife Eleanor of Aquitaine, John was called "Lackland" since the great expanse of his parents' English and French lands had already been divided amongst his squabbling older brothers. Henry decided that little John, therefore, needed to marry an heiress. Who better than the daughter of his own cousin, the Duke of Gloucester.

Despite the fact that Gloucester had other daughters and it was traditional to share a patrimony among sisters who had no brothers, Henry declared Isabella the sole heir. When she was about three years old, she was betrothed to nine-year-old Prince John, despite the fact that church law forbade marriages between such close relatives. Henry cared little for church law (you've heard of St. Thomas a Becket, right?) and besides it was easy enough to get a dispensation to overlook their cousinship. A few years later, Isabella's father died and she became Countess of Gloucester in her own right.

The dispensation was never granted. Old King Henry kept Isabella's money for himself. Soon after his death, John married 16-year-old Isabella immediately assumed control of her property. The Archbishop of Canterbury declared the marriage void and placed their territory under interdict, so that their people could not participate in church rites. A papal legate, however, overruled the archbishop and declared the marriage legal...as long as they didn't have sex.

Well, they certainly never had children. John, however, fathered numerous illegitimate offspring during the marriage. And, John was known to have looked about for other even more lucrative brides. Ten years later, John succeeded his older brother Richard the Lionheart as King John but Isabella was never styled as his queen. Almost immediately he set her aside. He received an annulment based on the old grounds that they were too closely related and ran off to marry a French heiress who was technically already engaged to someone else and two was at most 15 and perhaps as young as nine years old.

The divorce settlement was hardly favorable to Isabella, who was forced to give up her rights and riches as Countess of Gloucester. John kept all of that. He did pay for her living expenses but seems to have required her to serve in his new wife's household for a period of time. And, as long as John held on to the Gloucester lands, the still young-ish Isabella was not allowed to remarry. Fortunately for her, John was always looking for ways to make money. Nearly 14 years after the marriage ended, he decided to raise some funds by selling off the right to marry his ex-wife and throwing in the Gloucester lands and title. Isabella was a countess again and married off to the highest bidder, Geoffrey de Mandeville Earl of Essex, who was 16 years younger than she. A year later in 1215, Countess Isabella and her husband joined a widespread rebellion against John--the one which resulted in the Magna Carta. A few months later, Geoffrey was killed in a tournament, but the lands and titles had been left forfeit to the Crown because of the rebellion. Nevertheless, Isabella, now in her forties was more or less in charge of her own life for the very first time.

It was short-lived an unmarried rich woman was a great commodity in those days. After the death of John, the child King Henry III (John's son by his second wife) granted the rebellious Isabella's patrimony to the loyal Hubert de Burgh. Shortly thereafter, he gave Hubert Isabella too and she was married for the third time. She died within a few months, never having had any children. The Gloucester title went to her nephew, but it eventually returned to the crown and is currently held by The Queen's cousin, Prince Richard Duke of Gloucester.

More about Isabella of Gloucester:

Both of her full brothers, Baudoin and Albert, later became Kings of Belgium and her nephew Philippe now sits on that throne. Josephine Charlotte, however, built her life in Luxembourg after marrying Jean, later the Grand Duke of Luxembourg. The couple had five children, including the current Grand Duke Henri. Josephine Charlotte succumbed to lung cancer in 2005 at the age of 77.