In recent weeks, I've become entranced with television shows about geneaology. In some of these programs, celebrities trace their heritage and are surprised and delighted to find images and documents related to their ancestors. (Queen Noor of Jordan, born plain old American Lisa Halaby, was stunned to find numerous newspaper articles about her grandfather, a turn-of-the-century immigrant merchant.)

Just for fun, this week, I thought I'd take you on a photo tour of Queen Elizabeth II's recent ancestors. (Generations 1-5 are wedding day pics!)

Notice that the mother of the groom, Queen Victoria (seated) is staring at a bust of her late husband.

(I'm very conscientious about photo royalties and copyright in general, so apologies for not being able to find a usable image of the Duke but I think getting to see Baby Queen Victoria makes up for it!) 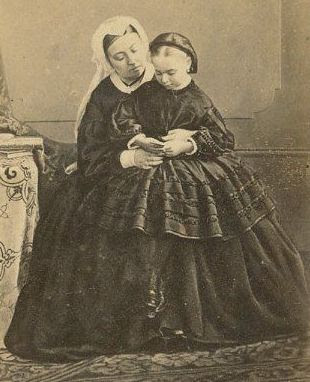 Nine children is a large family in any age. For Queen Victoria, who had prayed not to have too many children, the arrival of the ninth child might have been a less-than-delightful occasion. And yet, the birth of this child welcomed one of the brightest periods in the marriage of Victoria and her husband, Albert. Two months later, Victoria officially gave Albert the title of “Prince Consort,” finally providing him with an official role in the country he had called home for nearly two decades.

From the moment she arrived, Beatrice Mary Victoria Feodore, or “Baby” as she was usually called, was the darling of the family. Her nearest brother was four years older and her closest sister was nine years older—she was, indeed, the baby of the household and she was indulged in ways that her oldest siblings would never have imagined.

Both of her parents adored her. The Queen, who herself admitted that she only liked pretty children, was delighted by Baby’s big blue eyes and tiny mouth. The oldest child, Vicky, remarked that Baby was “quite the prettiest of us all, she is quite like a fairy.” Their father agreed, but also added that she was also “the most amusing baby we have had.”

As with most daddies, he was, of course, prejudiced. He could find humor in even the most annoying of Baby’s behaviors as evidenced when he wrote of the day-old princess’s wailing: “Baby practices her scales like a good prima donna before a performance and has a good voice!”

Albert was a strict father but could also be lovingly indulgent. He was certainly a more natural parent than Victoria. “It is indeed a pity that you find no consolation in the company of your children,” he once wrote to his wife, “. . . It is not possible to be on comfortable terms with people you have just been scolding.”

Baby suffered far less of Mama’s scolding: her big blue eyes and naughty charm earned more laughter than reprimands. Even when the bouncing toddler used the Queen’s apron strings to tie her to her chair, no punishments followed. The youngster was still invited down to tea and encouraged to entertain guests with songs and bits of poetry.

Once, when Baby took too much of a treat, Victoria gently reminded her, “Baby mustn’t have that. It’s not good for Baby.” To which the golden-hair pixie replied, “But she likes it my dear.”

While Beatrice showed none of the fear that characterized the relationships between her siblings and the Queen, her adoration of her father was even more apparent. She was definitely a daddy’s girl. Beatrice was born at just the right moment to earn Albert’s deep affection, for she was able to fill a hole left in his heart by the marriage of his oldest daughter, Vicky. Bright and lovely, Vicky had always been Albert’s favorite. She was more clever than any of her brothers, more lovely than any of her sisters and more responsive to the education Albert had outlined for his children. But, at 17, she was in love with the future German emperor and Albert sadly had to watch her sail away to a new life on the Continent when Beatrice as only nine months old.

Although he corresponded frequently with Vicky, her departure left plenty of time for him to indulge his prettily charming new baby. When Vicky began having children in rapid succession, Albert wrote that these infants should model themselves after their Aunt Beatrice. Baby herself delighted in being an aunt—whenever she was asked to do something she didn’t like, the three-year-old excused herself because she needed to write letters to her niece.

Baby Beatrice started most days by toddling into her father’s dressing room where she would watch him as he shaved. Then, Albert would sing to her in English and his native German and enjoy her own little songs and stories. Later, he would place her on his knee as he played piano or organ, sharing with her a love and talent for music that would be even more pronounced in her than among all of his children, each of whom was musically gifted.

At supper time, Albert would sometimes wrap Beatrice in a large napkin and swing her in the air. Even when she was naughty, he couldn’t help but chuckle at her cleverness. Once, when he scolded her for being troublesome, she replied, “No, Baby’s not. She’s a little girl.”

Each day of Beatrice’s early childhood seemed more golden than the day before: playing in the miniature house Albert had constructed, walking along the seashore of their house at Osborne, having tea with her mother on the family yacht, entertaining her brothers and sisters who rewarded her for reciting words in French.

Then, suddenly, Baby’s world turned upside down. Early in December 1861, Albert became terribly ill with typhoid. By Dec. 6, Victoria was desperate to raise his spirits and help him rally. She led the four-year-old Beatrice to his bedside. The bubbly little girl recounted her latest French verses to him and managed to make him laugh. She kissed him and held his hand for a long time before being led away so that he could rest.

It was the last time she would ever see him.

Eight nights later, the Princess was sleeping peacefully down the hall, when Albert took his final breath. Shocked and horrified, Victoria raced from his deathbed to the room where Albert’s littlest angel lay nestled in innocence, unaware of the family’s grief. Victoria gently lifted Beatrice from her bed, careful not to awaken her, and dashed back to her own room. She wrapped Beatrice in Albert’s nightshirt and placed her in the bed beside herself.

There, the restless and distraught mother awaited a dawn that would forever change her sleeping Baby’s life.