Twice this week, I have been asked whether The Duchess of Cambridge has recently miscarried. My response: if you read about it in the supermarket, it probably didn't happen. Nevertheless, Prince George's first birthday has a lot of people looking wishfully toward Kate's belly. Poor Kate. There are many drawbacks to being a princess but one of the worst is undoubtedly everyone's constant obsession with whether or not you are breeding. I am reminded that the Princely House of Monaco once felt compelled to announce that Princess Caroline, "like most women," simply did not have a "perfectly flat stomach."

Here at The Princess Palace we (meaning I) officially despise Baby Bump Watches as invasive and stress-inducing--think of Crown Princess Masako of Japan. Nevertheless, recent key word searches have brought many readers to the blog looking for breaking news about impending royal babies. It is clear that many people (myself included) are excited about the possibility of royal siblings for Princess Estelle of Sweden and Prince George of Cambridge as well as a first child for the Hereditary Grand Duchess of Luxembourg, whose new sister-in-law delivered a child in near record time.

But, I encourage us all to damp down our excitement and instead focus on the royal babies we can already enjoy. We see new pics of Danes and Swedes with regularity. Prince George has made a couple of appearances this summer and by the end of the year we will have our long-awaited heir (or two!) in Monaco. Surely these babies are cute enough to satisfy us until another arrives in due time. Motherhood is challenging enough without rabid royalwatchers pressuring you into mass production. ;)

Happy Birthday: Three Royal Girls Who Are Ahead of George

Unless you are living under a bridge, you are likely aware that Prince George of Cambridge is celebrating his first birthday this week. But as adorable as he is--and who could resist those cheeks!--there are still three people standing between him and the throne. George is the only royal heir who is still waiting in line behind a parent, a grandparent, and a great-grandparent. Meanwhile, other royal kiddies are first in line behind only their daddies. And, as it happens, all three of these little darlings are princesses! So, let's take a look at the tiny girls who will be Queens probably long before A-George-Able of Cambridge gets his crown. 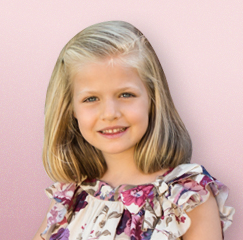 The youngest of this trio is The Princess of the Asturias, also known as Infanta Leonor. At just eight years old, she has been the Heiress Presumptive in Spain for just about a month since her grandfather's abdication. As an infant, Leonor was renowned for her Shirley Temple-esque curls (cuteness factor = sky high!) and impish grin. In recent years, she has become an admirable big sister to Infanta Sofia, and the two are occasionally dressed in coordinating but stylish outfits. It is expected that, like her father King Felipe, Leonor will pursue advanced degrees in international studies and military training when the time comes. Although Spain has dabbled with Salic Law, barring women from the throne during parts of its history, it actually has a rich history of reigning queens, including the most famous Isabella, who funded Columbus, and most recently the much less admired Isabella II in the nineteenth century.

In Belgium, on the other hand, 12-year-old Elisabeth Duchess of Brabant will be the first ever Queen Regnant when she eventually succeeds her father King Philippe. The royal Heir Apparent for just over a year, she also earned her place as first in line following a grandfather's abdication. However, she benefited from a change in royal succession law that was enacted a decade before her birth. If Belgium had not adopted absolute primogeniture, she would have had to cede her place to her younger brothers Prince Gabriel and Prince Emanuel, since male's had previously been given preference over their older sisters. She also has a baby sister, Princess Eleonore. In a nation divided by two distinctive cultures, Elisabeth's education has also been groundbreaking; previous royal heirs were educated primarily in French, but she has been educated in Dutch.

Our third young royal lady is Catharina-Amalia The Princess of Orange, who is the Heir Apparent of her father King Willem Alexander of The Netherlands. Like her two cohorts, abdication moved her into her current position, but in this case it was her grandmother who stepped down following what has become an established retirement tradition for Dutch monarchs over the last century. Amalia's granny Queen (now Princess) Beatrix was the third Reigning Queen in a row, and she was the third to voluntarily relinquish her throne. Unlike Leonor and Elisabeth, whose mothers are both native to their countries, Amalia has a more exotic background--her mum, the exuberant and brightly dressed Queen Maxima--hails from Argentina. She is the first woman born in the New World to serve as a European consort. Although ten-year-old Amalia did not have to worry about being superceded by a little brother, she has two little sisters, Princess Alexia and Princess Ariane. In fact, in the last four generations of the Dutch royal family, princes were only born in her dad's generation.