Queen Victoria as a Child 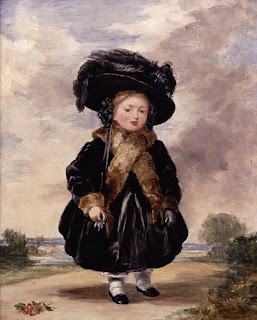 In response to search queries, here is a little tidbit about Queen Victoria as a child. Born in 1819, she was the only daughter of King George III's fourth son, the Duke of Kent. Her father died when she was an infant and she was raised at Kensington Palace by her German mother, who did not get along well with the royal British in-laws.

Through a series of tragically young deaths among her cousins, Victoria succeeded her uncles George IV and William IV when she was barely 18 years old. (Read my post about the "Royal Baby Race" at the Unoffical Royalty Site.)
By Cheryl Ciucevich