The Problem with Maria 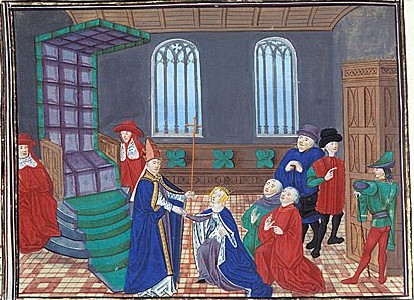 The Queen of Naples’ sister welcomed the Count of Avellino into the royal fortress of Castell dell’Ovo with the appropriate courtesy owed to one of the queen’s most powerful vassals. She had no fear of the small company of armed men that accompanied him. Naples was almost always at war and violent crime was rampant throughout the land. To travel without a militant escort would have been foolhardy.

But the mood shifted suddenly as the men encircled her. The count commanded the royal princess to marry his son, Roberto del Balzo. A hasty ceremony wasn’t sufficient to consecrate a medieval marriage—that required consummation. As the count’s guards barred her escape and in the presence of his father, Roberto violently raped her.

This wasn’t the first horrific drama in Maria’s life. Born six months after her father’s death, she and her older sister Joanna were orphaned when Maria was only two. With no brothers and no uncles, Joanna immediately become the heir of their grandfather King Robert the Wise of Naples. Female heirs in the fourteenth century did not make for a very stable kingdom and Naples was already an unstable country, even King Robert’s accession was still contested by his nephew, the King of Hungary. So Joanna and Maria were used for political matches. At seven, Joanna was married to the King of Hungary’s younger son, Prince Andrew, while Maria was promised to the King’s eldest son Louis.

In 1343, King Robert died and Joanna became Queen Regnant, but her Hungarian in-laws wanted Andrew crowned King. While that controversy simmered to a boiling point, the question of Joanna’s heir became critical. Just 16, she and Andrew did not yet have any children. That left 14-year-old Maria as the potential future queen. Since Maria’s earlier royal fiancé, now King Louis of Hungary, had married another princess, Joanna sought to solidify an alliance with France by offering her sister to the French king, but other factions were at work in the Neapolitan court.

The princesses’ great-aunt, the Duchess of Durazzo wanted to secure the crown for her handsome 19-year-old son Charles. Using her connections at the Papal Court, she secretly arranged a dispensation for the two to marry. Then, she kidnapped Maria. A clandestine ceremony followed and the marriage was quickly consummated. This time, however, Maria readily submitted to her new husband. Starry-eyed with love for her dashing cousin, she may even have helped arrange the illicit marriage. The rival Taranto branch of the family immediately took arms—they also had been maneuvering to secure Maria for one of their sons.

With militant hostilities growing more threatening, Joanna beseeched the Pope to annul the marriage, but he encouraged the young Queen to forgive the impetuous lovers. When Maria almost immediately became pregnant, Joanna relented and formally recognized Maria as her heir, although she did have to pay off both the Hungarian and Taranto branches of the family.

Nevertheless, the rivalries among the various factions within the Neapolitan royal house continued to simmer, particularly over whether Andrew of Hungary should be crowned King of Naples. Maria’s husband Charles of Durazzo was strongly opposed to it. Even Joanna, who did not care for her immature husband vacillated on the subject. Eventually, the Pope mandated Andrew’s coronation, but days before it was to take place, a group of secret conspirators—which almost certainly included Charles—put an end to Andrew’s regal aspirations.

Late that night, a servant lured Andrew, who had been partying all day, out of his chamber. A small group of armed men seized him, strangled him with a rope and flung him over a balcony where he dangled above the castle garden. Conspirators below pulled on his legs and then dragged his lifeless body down to be secretly buried. Awakened by his screams, Andrew’s childhood nurse startled the assassins, and they fled into the night before they could hide the body.

Andrew’s murder set off years of investigations, examinations by torture and military conflict. Accused of conspiracy, Queen Joanna herself stood trial before the Holy Father himself, but was acquitted. In the meantime, the 21-year-old queen married her cousin Louis of Taranto, hoping to provide a strong military commander to protect her kingdom from the threats of the King of Hungary, who not only wanted to avenge his brother’s murder but also wanted to seize the Neapolitan throne for himself.

Despite being ticked off over a Taranto prince marrying the Queen, the Durazzo princes nonetheless banded together with the Joanna to ward off the Hungarian invasion. Overwhelmed by the size and power of King Louis’ forces, however, all of the Durazzos and the Tarantos—except the Queen’s husband—surrendered without a struggle. Joanna and her husband escaped from Naples and the Hungarian king soon overcame the resistance of the inhabitants.

Once he felt secure, King Louis invited the princes to a fabulous feast. At the end of the meal, he seized them all. He kept the younger princes as hostages, sending them back to Hungary, but reserved very special treatment for Maria’s husband, Charles of Durazzo. Louis made Charles show him the exact spot where Andrew had been killed, forced him to kneel there and had him summarily beheaded.

Maria was now a 19-year-old widow with four young daughters.

An outbreak of plague and ongoing rebellion by Neapolitan nobles like the Count of Avellino caused King Louis to retreat to Hungary but he returned two years later. This time, he decided to employ a secret diplomatic strategy to ensure his success. Having lost his wife, he secretly sent a marriage proposal to Maria, who, despite the fact that this man had killed her beloved first husband, readily agreed. As Louis fought his way back across Italy, Queen Joanna was able to mount a stronger campaign thanks to support from her territory in Provence. Facing a drawn-out war, both sides agreed to the Pope’s request to cease hostilities for six months and seek a diplomatic solution negotiated at his behest by Avellino. While Queen Joanna and Louis of Taranto withdrew to Rome and King Louis of Hungary also made his separate way to the papal city, Avellino stayed behind in Naples to handle another mission from the Pope: to prevent Maria from marrying King Louis by marrying her to Roberto del Balzo. Once this task was so horribly fulfilled, Avellino, Roberto and Maria caught up with Joanna and her husband at Gaeta. The royal couple were incensed to discover that Maria had been debased by marrying beneath her royal status—and no doubt unhappy about her rape too. Louis of Taranto boarded the count’s ship, stabbed him to death and threw him overboard. Then, he took Roberto into custody and had him locked away. Several months later, Maria brought her own armed escort to visit her husband. Then, she watched as they hacked him to pieces.

In order to prevent Maria from making any more clandestine marriage arrangements or being captured by other power-hungry men, Joanna had her brother-in-law Philip of Taranto marry her. For good measure, she also took Maria’s daughters away from her and raised them herself. Since Joanna never had surviving children herself, Maria and her girls were incredibly important political assets.

While this marriage provided some stability, it did not prevent continued warring between Queen Joanna and her cousins of Hungary, Taranto and Durazzo. Once Maria died, the still childless Joanna unofficially made Maria’s daughter Margherita, who married Charles of Durazzo (nephew of the beheaded Charles of Durazzo) her heir. Meanwhile, the childless King Louis of Hungary made Charles his heir. Later,when Louis had several daughters, he disinherited him. Fearing that Charles would rebel and attack him, good ole King Louis decided to help Charles get his own kingdom by conquering Naples. Armed with men, weapons and plenty of Hungarian gold, Charles captured Joanna and had her assassinated.

Inspired by his own success in Naples, Charles invaded Hungary after Louis’ death and seized that throne from Louis’ eleven-year-old daughter. But Louis’ widow had learned a lot from her husband and his family. She had Charles assassinated and assumed control of Hungary in her daughter Maria’s name.
By Cheryl Ciucevich