Always a Monarch, Never a Mother

The recent unwarranted and extremely premature speculation about the fertility of the newly married Duke and Duchess of Cambridge--by the way, unless you are Henry VIII, you should know fertility is a two-person tango--has prompted some to ask what happens to the throne if they have no children. The answer is that it would pass from a future King Willam to a future King Harry and then to Harry's legal heirs.

In truth, many monarchs have not had children or have had their children predecease them. Since our focus here is royal ladies, I thought we would take a look at "childless" reigning queens and empresses. They may just outnumber the ones with children. For instance, in England, there have been six Queens regnant (seven if you count Lady Jane Grey), but only Queen Victoria and Queen Elizabeth II have produced their own heirs. Both Mary I and Mary II* were succeeded by their sisters who were each succeeded by distant cousins.

Centuries before, the English and Scottish thrones were united, there was a time when a little girl named Margaret of Norway was set to become Queen of Scotland following the death of her maternal grandfather, but her succession was contested. When she died at age seven on the voyage to Scotland, clearly without children of her own, the little kingdom was embroiled in a succession war. Had Margaret lived, King Edward I of England, who was hammering the Scots, might have married her to the Prince of Wales and united the thrones 300 years sooner. Instead, the union took place after the first Queen Elizabeth executed her cousin and presumptive heir Mary Queen of Scots for treason and left the English throne to Mary's son King James V of Scotland. As for Mary, who had inherited the Scottish throne when she was six days old, her mismanagement and personal scandals forced from the throne when James was still a baby.

In Russia, Peter the Great and his immediate heirs were not very good at keeping boys alive--often because they killed them. So, the throne bounced about somewhat haphazardly. Peter was followed on the throne by his widow, then his son, then his niece, then his niece's niece's son, then his daughter. Refusing to marry officially, his daughter Empress Elizabeth adopted her sister's son as her heir. She married him off to a minor German princess who was re-christened as Catherine, but the imperial couple had no children after nine years of marriage. So, some speculate, Elizabeth allowed/encouraged Catherine to find a new stud, which was resulted in the birth of Grand Duke Paul. After Elizabeth's death, Catherine launched a coup d'état to seize the throne for herself. She was ultimately followed by her son Paul, who may or may not have been a Romanov. 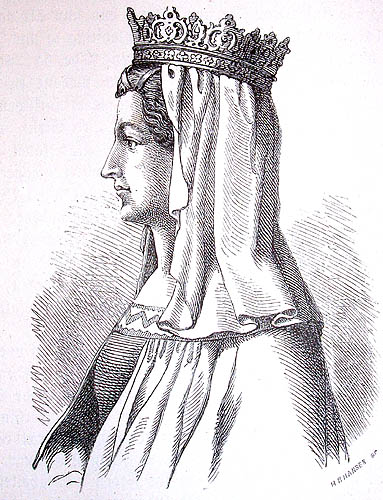 Margrethe I
In Scandinavia, 14th century Queen Margrethe I served as regent for her only son Olaf II, but when he died at 17, she was invested with the power herself and with her husband, she united the thrones of Denmark, Sweden and Norway. She selected her great-nephew Eric of Pomerania as her heir. Later, the famously tomboyish, cross-dressing Queen Christina of Sweden refused to marry. She eventually abdicated in favor of a cousin, converted to Catholicism and moved to Italy, where she apparently had a rollicking good time. A few generations after that, Queen Ulrika Eleonora succeeded her brother to co-reign with her husband Frederick I, who continued to rule without her after his death and was followed by their son. Today, Margrethe II of Denmark has two sons and is awaiting the arrival of her eighth grandchild.

Wilhelmina and Juliana
On the Iberian Peninsula, the various reigning Spanish and Portuguese queens were all dynastically successful although their male counterparts did not always manage to leave legitimate children. Perhaps one of the most interesting stories of fertile female monarchs is being told in The Netherlands, where three generations of queens have reigned in a row. In 1890, nine-year-old Wilhelmina succeeded her elderly father. She had two half-brothers who were supposed to become king instead, but they both died unmarried in their thirties. Wilhelmina passed the throne to her only child, Queen Juliana who had four children--all girls. When her oldest daughter, the current Queen Beatrix had a son in 1967, he was the first Dutch prince to be born in 116 years! He now has three children of his own--all girls!!

*Mary II co-reigned with her husband (and first cousin) William III with the understanding that if she died before him, which she did, her sister Anne would not assume the throne until his death.
By Cheryl Ciucevich