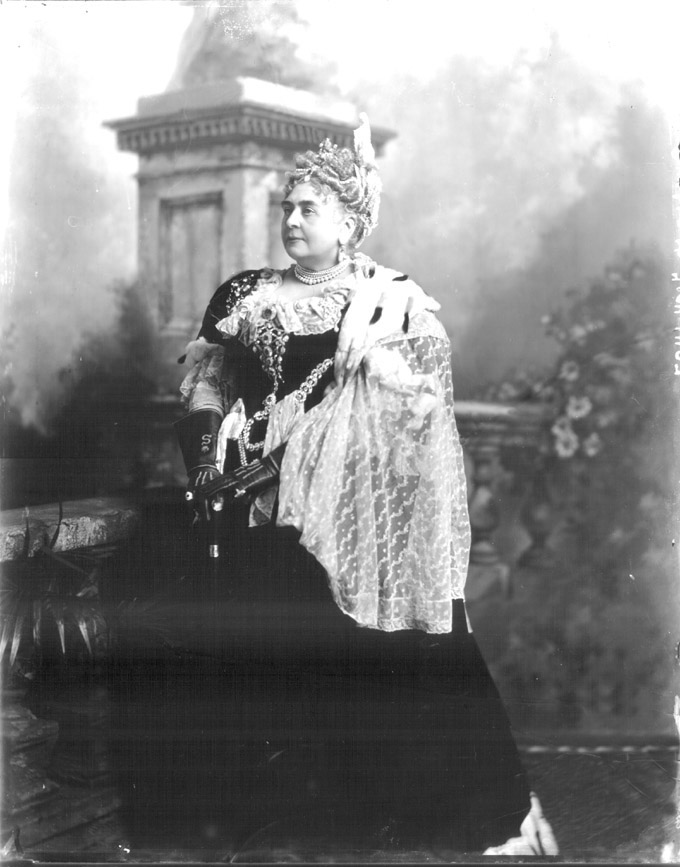 (2 May 2015--Click for more about the newborn Princess of Cambridge.)

King George III's youngest grandchild, Princess Mary Adelaide of Cambridge, was a big woman in every way. Her circumference troubled many of her relatives. Her over-the-top personality stood in stark contrast to her daughter's shy demeanor. Her extravagant spending caused her to flee England. Her giant heart led her into many, many charitable endeavors (that frankly contributed to some of her money problems.) And, all of this together made "Fat Mary" one of England's most beloved royals with the moniker "People's Princess" that today's royalwatchers generally associate only with Princess Diana.

Mary Adelaide was born in 1833 in Germany, where her father The Duke of Cambridge was acting as Regent in Hanover for his brother King William IV. Four years later, her first cousin Victoria became Queen and the Cambridges returned to England. Fourteen years younger than Victoria, Mary Adelaide became one of Victoria's romantic projects. The Queen longed to find a husband for her vivacious but not very pretty young cousin. Try as she might, her matchmaking efforts were initially stymied, for Mary Adelaide also didn't have any money and her pool of potential partners was limited to princes.

Alas, an eager young prince, with few prospects and even less money, was finally found who was willing to take her on. At the very-old-for-a-Victorian-bride age of 33, Mary Adelaide married the dashing Prince Francis of Teck, a minor serene highness from a morganatic branch of the Wurttemburg royal house. Rather than decamping to live on the continent, the newlyweds remained in England, where Mary Adelaide received some income from Parliament for her role as a royal princess (with some supplements from her Mama) and benefited from grace-and-favor residences in London and in the country provided by Queen Victoria. So it was, that Mary Adelaide's first child, Princess Victoria Mary of Teck, known as May, was born in Kensington Palace. May's birth was followed by three boys, with the last arriving when their mother was 40.

Well loved for her charitable works, Mary Adelaide taught her daughter that this was the best use of a princess's time. She involved her daughter in all of her works with hospitals and children's charities, taking an active role at every stage, behind the scenes and in public. She was indefatigable. These values have been passed along to today's royals as May, also at the hands of the matchmaking Queen Victoria, married The Duke of York (read about their romance in my post, A Royal Love Triangle), who would eventually become King George V. As Queen Mary, she set the tone for the British Royal Family of the 20th century and passed the values she had learned from Mary Adelaide down to her granddaughter, today's Queen Elizabeth II. (She also passed along the Cambridge family's interest in and support of homeopathic medicine.)

Mary Adelaide passed away in 1897 at the age of 63 following an emergency surgery. Fortunately, her husband was able to keep her Parliamentary income until his death in 1900. When the extended royal family dropped their Germanic titles during World War I, their surviving sons became the Marquess of Cambridge and the Earl of Athlone (who married Princess Alice of Albany).

Focusing on her jewels: The Teck Tiaras on The Royal Order of Sartorial Splendor

Focusing on her interest in homeopathy: Princess Mary Adelaide of Cambridge Duchess of Teck on Sue Young Histories

There is also a full-text version of a memoir written about her with the cooperation of her children:
A Memoir of Her Royal Highness Princess Mary Adelaide Duchess of Teck by C. Kinloch Cooke
By Cheryl Ciucevich