How to Become a Princess

(2018 Update) If you don’t have monarchs for parents, but you are thinking of choosing princesshood as your career path—today’s princesses have to work (and give up all privacy) for the privileges they receive—here are a few tips based on how some of this century’s royal ladies gained their tiaras. A generation ago, your family still had to live on top of a royal family for you to get inside (Fergie’s dad was a royal polo manager and Diana was literally born on a royal estate), but contemporary royal wannabes can be a little more proactive.

In 1999, Argentine-born New York investment banker Maxima Zorriegueta met the Crown Prince Willem Alexander of the Netherlands during the Seville Spring Fair in Spain. He introduced himself simply as “Alexander.” When he later told her he was a prince, she basically said, “Yeah, right.” The couple conducted a transatlantic affair while she kept her prince’s true identity secret from her folks. She did eventually tell them that the mysterious Alexander was a prince, but Maxima’s wedding was not a true fairytale: her father was encouraged not to attend because the Dutch Parliament questioned his possible ties to a former Argentine military dictator. Both of her parents stayed away from the wedding, but continued to be actively engaged in the lives of their daughter and her three blonde baby girls. Maxima and Alexander regularly make extended family visits to Argentina. 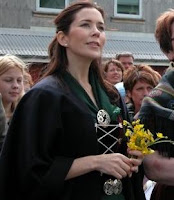 In 2000, Australian advertising agent Mary Donaldson made a fateful choice of night spot during the Sydney Olympics. When the Crown Prince Frederick of Denmark slipped in to the Slip Inn for a nip, lovely Mary slipped in to his life. (Please pardon the puns.) She and her friend reportedly were trying to determine whether the men hanging out in the bar had smooth or hairy chests when three young bucks—who just happened to be Frederick, his brother Prince Joachim and their cousin Prince Nikolaos of Greece—offered to let the ladies feel theirs. Although Frederick was smitten, Mary admits she didn’t fall instantly in love. A year later, she moved to Paris to be closer to him and a year after that to Denmark. And, one year after that, she finally walked down the aisle. (Her dad, a former math professor, moved to Denmark to be closer to his daughter. He helps look after Mary’s two little ones whenever he can.)

Incidentally, the current Queen of Sweden, German-born Silvia Sommerlath, met her prince while working as a translator during the 1972 Olympics in Munich. And, the current Queen of Spain, who was born a Greek princess, reportedly made her love connection with the future King during the 1960 Olympics in Rome (where she was on the Greek sailing team) even though they had met years previously. A warning to you cold-weather ladies: it seems to be the Summer Olympics that produce the most romantic results for young princes, although Prince Albert of Monaco was first seen publically with his current flame, Rhodesian-born swimmer Charlene Wittstock, during the opening ceremonies of the 2006 Winter Olympics, they had met when she competed at an international swimming event in Monaco.) 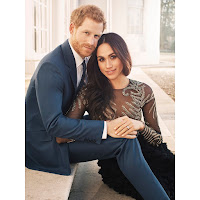 Prince Harry was introduced to Meghan Markle by a mutual friend in the summer of 2016. Before their blind date, Meghan famously asked, "Is he nice?" As it turns out, he was. Within a few weeks, they were camping together in Botswana. After that, they began a transcontinental romance during which they managed to stay mostly out of the public eye AND to go very few days at a stretch without seeing each other. Meghan and Harry announced their engagement in November 2017 and were married at Windsor in May 2018, at which time they were created the Duke and Duchess of Sussex.

American Marie-Chantal Miller met Crown Prince Pavlos of Greece at a friend’s party in New Orleans in 1993. He grew up in exile, mostly in London, while she grew up all over the world—New York City, Hong Kong, London, Paris, Switzerland—thanks to her family’s wealth from Duty Free shops. In fact, some believe she brought more money into the marriage than he did. Married in 1995, the couple now has five children, with the oldest starting to make their way in society and the youngest still enjoying a happy childhood, as shared by their parents on Instagram. Plus, Marie-Chantal has put her experience as a mother and a retailer's daughter to good use: she has an exclusive line of children’s clothing.

In 2001, Spanish television journalist Letizia Ortiz Rocasolano met the future King of Spain, Felipe Prince of Asturias, at a dinner party hosted by mutual friends. However, their romance didn’t actually start until they met again a year later when she was covering an oil spill in northern Spain and he came to region to commiserate with the people of the area. Letizia continued her high-powered career—having reported from the frontlines of the Iraq war and covered the Sept. 11 attacks—while the two engaged in an extremely secret courtship. Perhaps as a journalist herself, she knew how to avoid other journalists and their intrusive speculation. In fact, newspapers did not begin reporting on their relationship until just days before their engagement was announced in 2003. Coincidentally, Letizia was actually born in the Asturias region, so, in a way, she became Princess of her hometown before becoming Queen in 2014. At that time, her oldest daughter became Princess of Asturias.

Norwegian waitress Mette-Marit Tjessem Hoiby met the Crown Prince of her homeland through mutual friends at the Quart Festival, a rock festival in her hometown of Kristiansand, in 1996. (I guess I should have attended the festival when I was in Norway in ’92; I could have found him first!) They later shared a taxi and began falling in love. Like most Scandinavian couples, Mette-Marit and Crown Prince Haakon cohabitated before their marriage but eventually tied the knot in 2001. They added two more children to the son she brought into the marriage with her.

Not surprisingly, university applications usually spike whenever a prince announces where he will be studying. This was certainly the case when Prince William of Wales decided to attend the University of St. Andrews in Scotland. As a fellow art history student, Catherine (Kate) Middleton soon became one of the prince’s inner circle. In their second year at St. Andrews, they and some other friends moved in to a cottage together. Speculation about their relationship grew when he was photographed watching her model a scanty outfit in a university fashion show. In the last nine years, their romance has made quite a lot of money for the tabloids. The constant pressure from the media has often strained the relationship. After a brief split in 2007, they reunited and finally married in 2011. By 2018, they had added two little princes and a princess to the British Royal Family.

Tessy Antony met the younger son of her country’s Grand Duke, while serving on a NATO peacekeeping mission in Kosovo in 2004, where she worked as a driver. This apparently helped her meet 18-year-old Prince Louis of Luxembourg when he came to visit the troops. Two years later, their first child was born and, six months after that, the couple was married. To marry his love, Louis gave up succession rights for him and his children. Also, Tessy was denied the rank of princess. Earlier this year, however, Tessy and her two little boys were finally granted royal rank, making her a Princess of Luxembourg while her sons are Princes of Nassau. Since, Tessy and Louis divorced in 2017, she has lost her royal title but she remains active with humanitarian work.

Although Charles Prince of Wales was under extraordinary pressure to find a “pure” bride—quite a task in post-Sexual Revolution Britain—when he became engaged to the teenaged Lady Diana Spencer, today’s princes are far less particular. Mette-Marit had been linked to drug users and already had a son from another relationship when she married the Crown Prince of Norway. Mette-Marit's son, the adorable Marius, is so accepted by the royal family that he is listed as a member of the royal family on its official website alongside his royal half-siblings. Meanwhile, Letizia had already been married and divorced, when she met Felipe. Likewise, Meghan has an ex-husband in her past, too. Meghan is also not the only actress-turned-princess: Prince Carl Philip of Sweden's wife, the former Sofia Hellstrom, was an actress and glamour model, who had posed nearly nude and appeared as a reality TV contestant.

Hong Kong-born British citizen Alexandra Manley met Prince Joachim of Denmark when he worked for a Danish shipping company in Hong Kong. With both European and Chinese grandparents, she became the first mixed-race European princess when they married a year later in 1995. Together, they had two sons before they divorced in 2005. Alexandra had become extremely popular in Denmark thanks to her lovely personality and expansive charitable works, so her former mother-in-law, Queen Margrethe II, gave Alexandra her own title, Her Highness The Countess of Frederiksborg. Since this is a personal title, Alexandra was able to keep it when she married Martin Jørgensen in 2007, although she was downgraded from “highness” to “excellency.” (Lady Diana Spencer lost “Her Royal Highness” upon her divorce although she was allowed the style “Princess of Wales,” as if the title were her last name. Had she remarried, she likely would have forfeited that style to take on her new husband’s name. At some future date, possibly when her son became king, she might have been given a title of her own, but this is purely speculation on my part.) 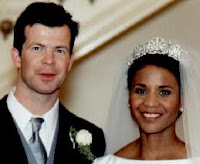 More racial diversity entered the European houses when Prince Maximilian of Liechtenstein, son of the reigning Prince Hans Adam II, married Angela Brown. Born in Panama of African descent, Angela grew up in New York where she later studied at Parsons School of Design (hello, Tim Gunn!) and became an award-winning fashion designer. The couple met when he was in New York working for Chase Capital Partners in 1997. They married in 2000; she, of course, wore a dress she designed herself.

With the arrival of Meghan Markle on the scene, these previous racially mixed ladies have been all but forgotten. To be fair, she has married into a much more famous royal family and automatically occupies a more prominent place on the world stage. However, it is inaccurate to assume that she represents a true "first." Even in the British Royal Family, she is not the first person of color: Prince Harry's cousin, Lady Davina Windsor, married a Maori man, making him the first POC in the Windsor family. In this case too, Meghan has a more public role. Even I wouldn't recognize Davina's now ex-husband, Gary Lewis, if he were standing next to me. In that sense, Meghan is undoubtedly the most visible person of color in any royal house.

For more about royal love stories, check out this great infographic from Invaluable.
By Cheryl Ciucevich