Meet the Duchess of Cambridge

This morning, it was announced that Catherine "Kate" Middleton will become Duchess of Cambridge, Countess of Strathearn and Baroness Carrickfergus upon her marriage to HRH Prince William of Wales today. While there have been many Dukes of Cambridge, there have only been two Duchesses of Cambridge. 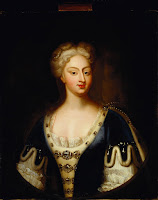 When the British decided to skip over all of the Catholics in the Line of Succession and settle the succession on the German family of Stuart granddaughter Electress Sophia of Hanover, Sophia's grandson George was named Duke of Cambridge and his wife Caroline of Ansbach became his Duchess in 1706. Sophia died too soon to become queen and her son became King George I in 1714 when George and Caroline became Prince and Princess of Wales. In 1727, they became King and Queen. Among their many children was Frederick Prince of Wales whom they both despised and who did not outlive them. Caroline is generally considered one of the most capable consorts. She has very involved in "helping" her husband and his Prime Minister Robert Walpole.

It was quite some time before another Duchess of Cambridge appeared and it almost didn't happen then. Adolphus, the seventh son of King George III was made Duke of Cambridge, but like so many of his brothers, who was not very keen on getting hitched. But, when the only child of the Prince of Wales died, all the unmarried royal dukes, quickly married much younger brides in hopes of fathering the next royal heir. Twenty-one-year-old Augusta was half her husband's age. They did have several children, but unfortunately for them, Adolphus was just too far down the line to inherit the crown that went to Victoria, daughter of the fourth son. Perhaps the best remembered of their children was Princess Mary Adelaide of Cambridge who married the Duke of Teck and became the mother of the future Queen Mary, consort of King George V and grandmother of Queen Elizabeth II. It is undoubtedly the queen's close family connection that makes the Cambridge title so appealing for her grandson.


Britain's Prince William and his wife Catherine, Duchess of Cambridge kiss as they stand on the balcony at Buckingham Palace with other members of their families, after their wedding in Westminster Abbey, in central London April 29, 2011. Prince William married his fiancee, Kate Middleton, in Westminster Abbey on Friday (ROYAL WEDDING/ BALCONY) REUTERS/Dylan Martinez (BRITAIN - Tags: ROYALS ENTERTAINMENT SOCIETY IMAGES OF THE DAY)

Now, we shall see how Catherine, only the third Duchess of Cambridge, will perform in her new royal role. Best wishes on this happy day!

Read more about the history of the Cambridge title on Royal Musings.
By Cheryl Ciucevich