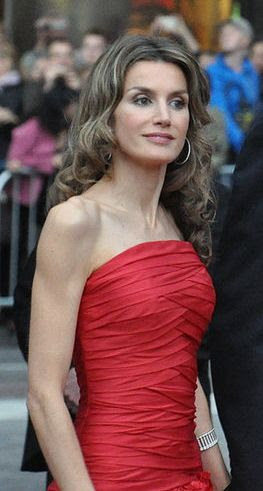 With today's surprise announcement that King Juan Carlos will soon be abdicating the throne of Spain, we can prepare to welcome a new Queen to our royal ladies. Of course, we have been following the former Letizia Ortiz Rocasolano since her engagement to Felipe Prince of the Asturias was announced in November 2003--another surprise since no one seemed to know that a romance was afoot. The engagement was rocked by some controversy because she had been previously married and by real tragedy with the terrorist train bombing of March 11. Through it all, Letizia showed true grace and the affection between the couple was apparent.

Letizia is one of the few royal wives who is a native of the land of which she will be Queen, but charmingly she hails from the region from whence her husband draws his top title. (Imagine if Diana had been Welsh.) She is well-educated with both undergraduate and undergraduate degrees. Before her marriage, she had a distinguished career in television journalism, working for several agencies including Bloomberg and CNN+. In fact, it is said that she met Felipe while reporting on an oil spill that he had come to inspect.

Together, she and Felipe have two gorgeous daughters, Infanta Leonor, who will now be the heiress to the throne, and Infanta Sofia.

Read my post about the drama surrounding the last abdication in Spain: A Night at Palacio Real.