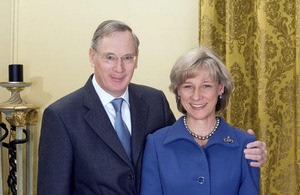 On July 8, 1972, an ordinary Danish woman became a British princess when King George V's youngest grandson, Prince Richard of Gloucester, married Miss Birgitte van Deurs in a country church near his family home in Barnwell in Northamptonshire. Born a year after the end of World War II in Odense, Denmark, Birgitte led a rather ordinary life as a lawyer's daughter. Her parents split up when she was about 20, at which time she chose to drop her father's surname, Henriksen, for her mother's, van Deurs. She completed primary school in Denmark and secondary school in Switzerland before enrolling in a fashion school in Copenhagen. From there, she went to England to study languages, securing a job at the Danish Embassy in London. When she met Prince Richard, he was a rather unassuming architecture student at Cambridge. Like his cousin, Prince Michael of Kent, he was a younger son who was expected to make his own way in the world.

On their wedding day, Miss van Deurs immediately became Her Royal Highness Princess Richard of Gloucester. Nevertheless, she and Richard likely expected to live a rather ordinary life on the very fringes of the British royal family, occasionally showing up for balcony appearances on his cousin The Queen's official birthday but otherwise raising their family and pursuing careers. His older brother, Prince William of Gloucester, would inherit their father's title and be the one called upon to carry out official royal duties. Fate had other ideas. Just 51 days after their wedding, the unmarried daredevil Prince William was killed in a plane crash at an air show in front of 30,000 spectators. Richard suddenly became the heir to their father, who died less than two years later. The former Miss van Deurs became Her Royal Highness The Duchess of Gloucester before her second wedding anniversary.

Four months after that, she became a mother with the birth of their son Alexander Earl of Ulster in October 1974. Daughter Lady Davina followed in 1977 with Lady Rose completing the family in 1980. They raised their children at the family's country home in Barnwell and at Kensington Palace, where they were neighbors and playmates for the Wales children, Prince William (named for Richard's brother) and Prince Harry. Richard's mother was also a permanent fixture in their family unit. The Dowager Duchess of Gloucester, who was dearly loved by her husband's niece The Queen, had been granted the special favor of being styled as a princess in her own name during her widowhood. She became HRH The Princess Alice, and outlived her sister-in-law The Queen Mother to become the longest lived British royal, passing away at the age of 102.

The Gloucesters have been great supporters of The Queen taking on numerous patronages and responsibilities. They have carried out official foreign visits to more than two dozen countries and serving as colonel-in-chief of numerous military regiments in Britain and the Commonwealth. Birgitte's charitable patronages include the Royal Alexandra and Albert School, Bliss baby care, Prostrate Cancer UK, Bridewell Royal Hospital, and the Royal Academy of Music, which she inherited from Diana Princess of Wales. Although many people today don't know who the Gloucesters are, you can spot them at key royal moments throughout the year like Trooping the Colour, Royal Ascot, and the Cenotaph on Remembrance Day.

Now grandparents to six little ones aged four through ten, the Gloucesters still carry on their royal duties. Their children and grandchildren tend to stay out of the spotlight entirely. In fact, they are usually only spotted through car windows heading to The Queen's family Christmas dinner in London. (The male-line descendants of George V, including the Gloucesters, used to spend the entire holiday together at Sandringham or Windsor before the family got so large.) You may also spot one or two of them on the balcony for the RAF flyover on The Queen's official birthday. Quiet, steadfast, and reliable, Birgitte and Richard (and their children) have never caused a moment of worry, concern, or negative press comment. They are the quintessential royal relatives.