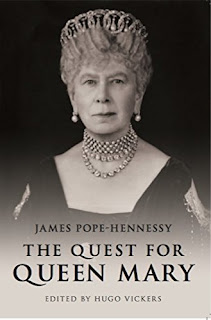 I am not entirely sure how to categorize the latest book from Hugo Vickers, but I know I love it! As one of today's most respected royal biographers, Vickers has a high standard to uphold. His royal subjects have included Queen Elizabeth II's mother and her mother-in-law as well as the eternally fascinating Duke and Duchess of Windsor. For 2018, however, he brings us something completely different with a new and unusual approach to the Queen's paternal grandmother, Queen Mary.

The Quest for Queen Mary is not a true biography and Vickers is not its author. Instead it is a study about the writing of Mary's official biography by James Pope-Hennessy. By tracing Pope-Hennessy's preparation for the project and including the author's personal notes about his many, many interviews, editor Vickers manages to give us not just a treatise on how to write a royal biography but an exciting insight into the world of mid-20th century royalty. The views we get are sometimes surprising in their seemingly pedestrian activities (we see various royals driving themselves around town, planting flowers, playing parlour games, etc.) while simultaneously offering shockingly intimate revelations (secret liaisons, conflicting views of prominent personalities, and direct criticism of family members).

As the officially sanctioned biographer, Pope-Hennessy had nearly unfettered access to royals across Europe as well as their closest servants/staff members/advisers. No great monarchist himself, Pope-Hennessy is both at home and asea amidst the often glamorous but sometimes disorganized environments in which he found himself, each of which he describes in amazing and colorful detail. If you want to know about the homes and pets and eating/drinking habits of Queen Mary's extended family, Pope-Hennessy has provided delicious details. We get close-up views and direct conversation from Queen Mary's two surviving sons, the romantic Duke of Windsor and the far less celebrated Duke of Gloucester. We are reminded again and again that Mary and her late husband, King George V, were terrible parents, but we also learn that Mary was ostracized and maybe a bit bullied (to use today's vernacular) by her royal in-laws, that she was greatly embarrassed by her parents, but that she was dearly beloved by her nieces, nephews, and cousins. We learn deep, dark royal secrets, many of which were too deep and dark for Pope-Hennessy to include in the official biography.

Through it all, the notes are richly and thoroughly annotated by Vickers to ensure that the reader understands exactly who is being discussed at every turn. This is critical in a world where many people were known by familial nicknames and where their titles changed throughout their lifetimes.

The Quest for Queen Mary provides the reader with a fly-on-the-wall view of royalty, albeit from someone who was generally unimpressed by such august personages. We sit on the sofa with Prince Philip's aunt Queen Louise of Sweden. We get a few opportunities to meet Queen Victoria's popular  granddaughter Princess Alice of Albany, aka the Countess of Athlone, who remained a beloved member of the British Royal Family until her death in 1981. We even get to meet with a newly ascended Queen Elizabeth II at that most remote of royal homes, Balmoral.

Throughout all of it, Pope-Hennessy uses the language of his subjects, be it German, French, or the Duchess of Windsor's American Southern drawl. You can hear them speaking through the manner he selected to depict their individual styles. "You'll find the Dook is a slow starter," he records from the Duchess. Later, we hear the Duke declare, "You realise there are only three completely royal persons alive now? My sister, my brother, and myself."

Those who enjoy reading about royalty will devour every tasty morsel that asynchronous collaborators Pope-Hennessy and Vickers offer up. For those of us who also like to write about royalty, you will find crisp, clear insights into the singular art of researching royal history. Oh, and you will also learn quite a bit that you did not know about the Queen's venerated grandmother, including the human woman behind that stiff veil of royalty.