Documentary Review of Harry and Meghan: A Modern Royal Romance 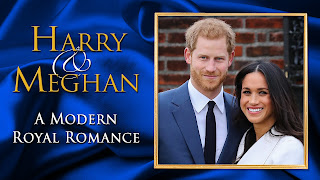 If you'd like to catch up on the background of Prince Harry's romance with fiancee Meghan Markle, you can check out the latest video on demand from Vision Films, "Harry and Meghan: A Modern Royal Romance." Available on most online and cable outlets, this one-hour doc includes interviews from some of the top royal experts, including former royal staffers Dickie Arbiter and Ken Wharf and royal journalists Katie Nichols and Robert Jobson.

The program traces the pre-romance lives of both Harry and Meghan, focusing more perhaps on Harry's much more documented childhood and young adulthood. In its overview of Meghan's background, I do have to wonder about the sourcing of some of the images as I don't believe any childhood photos have been released by official sources, so these have some from so-called "friends" or unworthy relatives (of which Meghan seems to have more than her fair share).

As with every documentary that has ever focused on Prince Harry or his brother Prince William, this one continues the myth that the two boys were influenced only by their mother, the late Diana Princess of Wales, who wanted them to have normal lives and, according to this doc, marry for love since she was so unhappy in her marriage. This is just a pet peeve of mine since Prince Charles was a very involved parent, and was credited by the media as such before his divorce, and he was their only parent from the time Harry was 12 years old. To be fair, this program does at least give some credit to their grandmother, The Queen, for how they turned out.

The program has good pacing and is fairly well-structured. It answers just about any question a viewer might wish to know. Some of the Meghan-focused blogs get some screen time. Meghan's positive influence on lifestyle/health issues and women's issues are included.

The cheerfully American narrator makes just a couple of minor missteps, two in the area of pronunciation and another couple in stating possibilities as certainties. First, the place where most royal weddings take place is Westminster Abbey, not Westmin-i-ster and Henry VIII was married to Catherine of Aragon not AragoRn. Second, she states without question that Meghan will be the Duchess of Sussex even though a title will not be announced until March 19 and that Meghan will definitely wear a tiara for the royal wedding although doing so is a personal choice that also has not yet been shared.

Overall, this is a solid, well-produced, easy to enjoy and factually accurate documentary, and you cannot really ask for better than that!

A second part, covering the royal wedding, is due out on May 31.