Buy This Book: In Defense of the Princess 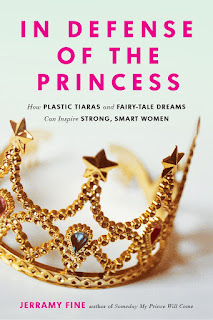 Summary: If you are fan of princesses, of the Disney variety or the royal variety or the three-year-old-with-a-plastic-tiara variety, you should buy In Defense of the Princess by Jerramy Fine. If you think princesses have no place in today's society, then you should REALLY buy this book.

(In the interest of full disclosure, I must admit that I want to be Jerramy Fine when I grow up.  In fact, I wish I were younger than her so that I could have read her first book, Some Day My Prince Will Come (read my review), and then modeled my young adulthood on hers. Alas, if I ever build a time machine, this is on my list of things to do.)

Suffice it to say that Fine knows a lot about princesses. She has made a study of them since she was a young girl, and through her own experiences, she came to see the value of the princess in today's society. Unfortunately, she also has learned that princesses need defending, not from dragons and evil stepmothers, but from people who think they know what's best for girls. By stereotyping the princess phenomenon as too gender-specific many people have failed to see how empowering it can be.

So, Fine is the knight in shining armor and this book is her trusty white steed, and she has come to save princesses from being denigrated, stigmatized and belittled. Having studied at the University of Rochester and the London School of Economics, she is more than able to take on the so-called feminists and gender-studies experts with point-to-point arguments in support of princesses.

Like all of Fine's book, this one is engaging and easy to read. It also is well-organized into a logical structure intended to demonstrate the great value that all princesses add to our lives, and especially that of little girls. She starts with the princesses every knows, the Disney princesses. For far too long, we have heard that this princesses are weak and just waiting to be rescued by a patriarchal prince. Fine offers a refreshing alternative look at Ariel and Belle and Mulan, etc. These are women who are unhappy with their situation and determined to create a life lived on their own terms. That is strong, not weak. That is true leadership.

From there, Fine offers insightful views, with plenty of examples, of why it is good to let little girls dress up in fluffy gowns and cover every inch of their rooms and themselves in various shades of pink. But, and this is the important part, only if they want to. At the end of the day, Fine believes that princesses offer excellent models of how to combine self-determination and strength with grace and beauty and with kindness and service. As women and girls, we should be able to embrace our personalities and our goals, even if they do contradict current societal trends. A woman doesn't have to intelligent or athletic, successful or beautiful. She can be as many of these things as she wants to be.

With this book, Fine only reinforces my own views that feminism and post-feminism, while important, are also a bit too limiting. Defining all things as either "male" or "female" actually is not any less onerous than pretending that gender neutrality is even possible. More and more, we are learning that there are genuine differences among the genders in general and wide variations of these gendered characteristics among the genders. The labels that have been assigned to girls both before and after the feminist movement are confining.

Fine proposes that girls and women should be seen within their own context and measured according to their own standards, and she encourages us to look to princesses whether the strong-willed Disney ladies or the community-oriented royal ladies for examples have to combine the best of who we are. How can society realistically tell a girl that she should not look to Princess Charlene of Monaco (an Olympic athlete), Queen Maxima of The Netherlands (an expert in finance with a particular interest in microfinance), or Queen Letizia of Spain (a national news correspondent) as role models just because they married princes? As Fine quotes Emma Watson: "you don't have to marry a prince to be a princess."

And, that in a nutshell, is exactly the point. If you (or your daughter) want to wear pink dresses or don a tiara every year on your birthday, you should do it. The princess phenomenon with all of its over-the-top marketing has been a boon for girls seeking an outlet for their creative dreams and self-development. (I would say, if a boy can play pirates--who were mostly ne'er-do-well criminals--why would we ever discourage girls from aspiring to be princesses?)

Toward the end of the book, Fine states categorically that being profeminist and pro-princess is not a contradiction as she lays claim to both: "I'm a feminist," she writes. "I have basic rights to life, liberty, and happiness, I want to vote, not to be owned by husband, get paid fairly for my work, have control over my body, have the same opportunities as men, and not ever be raped or beaten." This, she says is not a "political point of view--it's just true." But, that doesn't mean surrendering all that is feminine about us.

Fine's style, as always, is fresh and inviting. You feel like you are listening to one of your best friends telling you something that you already know, but maybe never really thought about before. (Yes, The Little Mermaid gave up her voice to get what she wanted, but that wasn't a prince; it was to be human. The prince was just a bonus.) She also provides plenty of insights from her own fascinating experiences as the daughter of hippies who now lives in London and has run her own princess program for girls. With this new book, we also get to see her perspective as the mother of a young daughter.

This is a well-planned, well-written and engaging book. Perhaps the best compliment I can offer is that I wish I had written it. But, at the end of the day, only Jerramy Fine could have made this happen so intelligently and so beautifully.

In Defense of the Princess will be released on March 22, but you don't have to wait until tomorrow to secure your copy. You can order it now in book form or for Kindle.