Her Majesty at 90: Decade by Decade

Queen Elizabeth II reached her 90th birthday today, with her 94-year-old husband at her side. If her mother is any indication, Her Majesty still has more than a decade here with us. Earlier this week, I posted photos from her first 10 years. Now, I offer you a look into her life for each decade.

Elizabeth Alexandra Mary Windsor was born on April 21, 1926 in the London Home of the Earl and Countess of Strathmore, her maternal grandparents. (Read my post about her birth.) As a daughter and the child of the second son of King George VI, she had no expectation of becoming queen one day. At four, she gained a little sister and the two little York princesses grew up in a relatively simple manner, enjoying country life surrounded by horses and dogs.


When she was 10 years old, Elizabeth's life changed forever. Her grandfather had died and her unmarried, childless uncle King Edward VIII decided to abdicate the throne, leaving her father to become King George VI. Since she had no brothers to displace her in the male-preference succession laws of the day, Elizabeth was thrust into a spotlight. Rather soon thereafter, the entire world was thrown into disarray by World War II. Elizabeth spent her teen years mostly at Windsor Castle, which remains her favorite home, helping to tend a victory garden and spending many nights in bomb shelters. Near the end of the war, she was finally old enough to join the war effort, which she insisted upon. She joined the Auxiliary Territorial Services and trained as a truck driver and mechanic. To this day, she is probably still the only auto mechanic in the royal family.


Before the war ended, Elizabeth had already selected her life partner, her third cousin Prince Philip of Greece and Denmark, who had renounced his Greek citizenship and royal titles during his war service in the British Navy. (Read my post about their romance.) The two were married in 1947 and he was given the title The Duke of Edinburgh. Their first child, Prince Charles, was born just a year later with daughter Anne arriving not quite two years later. Early in their marriage, Philip was posted with the Navy to Gibraltar and Elizabeth enjoyed some relatively carefree days as an "ordinary" wife of a young officer. Alas, her youthful bliss was short-lived when her father died tragically young and Elizabeth became Queen at the age of 26. She was away on a royal tour in Kenya at the time, staying at the Tree Tops hotel, and did not learn she was Queen for many hours after it had happened.


Having spent much of her early reign traveling throughout the Commonwealth and around the other parts of the world, Elizabeth postponed the expansion of her family until she was in her 30s. Prince Andrew was born shortly before her 34th birthday and Prince Edward four years later. It is generally believed that she was much more relaxed by this time, and that the younger siblings probably got a bit more quality time with their mum than Charles and Anne had.


In her 40s, The Queen began to encounter something she had never known: whispers on unpopularity as general unrest and economic issues spread over to include the Royal Family, which was seen as being outdated and too aloof. And so began an effort that continues today to present the family as more "normal." It began with the screening of a behind-the-scenes documentary of the film "Royal Family" in 1969 and included a rather modernized installation of Prince Charles as The Prince of Wales. Adding to the "common" touch, Charles is the only non-Welsh Prince of Wales who actually learned to speak Welsh.


It was in her 50s that Her Majesty became a grandmother. Her first two grandchildren were born to Princess Anne in 1977 and 1981, with Anne making the decision that neither her husband nor her children would bear titles of any kind. 1981 also ushered in the age of Diana The Princess of Wales who would revitalize--and traumatize--the monarchy like never before. With the birth of the two Wales princes, Her Majesty ended that decade in a haze of happiness that would not last long.


By her mid-60s, Elizabeth had two more grandchildren, the York princesses, but she also had two "troublesome" daughters-in-law. When both the Wales and the York marriages hit the skids at the same time, with much accompanying scandal and tell-all interviews and books, The Queen already had enough heartache. But, more was in store, when a fire tore through a large part of her beloved Windsor Castle, and questions about who would pay for the restoration combined with the other scandals led the monarchy near its lowest point, but even more was yet to come.


The Queen's 70s opened with the tragic death of Diana, which sent millions maybe even billions of people into deep mourning. When Her Majesty made the decision to stay on holiday in Scotland with Diana's two motherless boys safely ensconced away from public eyes and the media instead of returning immediately to London, the world was perplexed. Elizabeth returned to the capital shortly before the funeral and offered a generally well-received heartfelt tribute on television. Just five years later, more tragedy struck as The Queen lost her beloved little sister and her idolized mother within weeks of each other. Joy started to peek back in as her youngest son started his family with the birth of a daughter.


In her 80s, Elizabeth emerged into greater popularity than ever. With the birth of Edward's son, she became a grandmother for the last time in 2007 and three years later, she became a great-grandmother for the first time. In 2011, the family experienced another surge of public adoration with the marriage of grandson Prince William of Wales (now The Duke of Cambridge) to Kate Middleton. Then, 2012 brought two waves of excitement as the world celebrated The Queen's Diamond Jubilee at the beginning of the summer and the London Olympics at the end. During the Olympic Opening Ceremony, The Queen and her beloved corgi dogs were featured in a film with fictional British spy James Bond, which ended with an Elizabeth lookalike parachuting from a helicopter into the stadium and then The Queen emerging into public view as if it had indeed been her falling from the sky.


Now 90 years old, Elizabeth's popularity is still surging. From the celebration of her becoming the longest-reigning monarch last year, surpassing her great-great grandmother (see my post about that) to the beacon fires and street parties taking place all over Britain today, it seems like she will go on forever. Happy birthday, Your Majesty! 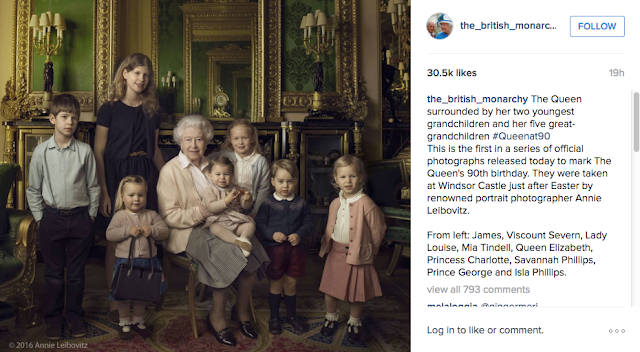